What Will Replace Spotify?

What Will Replace Spotify? Every year when Spotify Wrapped rolls around, the social media posts highlighting the exploitation and unfair revenue for artists are quick to follow. This year, the laments came early after many Spotify users posted their Instafest line-up posters, generated by a third-party app from data based on users’ recent Spotify history.

While many people within the music industry are quick to tear into the streaming service, there is a distinct lack of voices pushing the conversation further and suggesting how we can move beyond the exploitative practices of the platform. 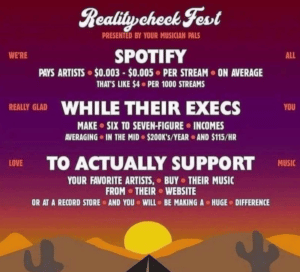 Every decade, there has been a reformation in how we consume music. In the 70s, vinyl records were the popular music formats; in the 80s, cassettes increased in popularity; in the 90s, CDs resolved the issues from the previous two formats; in the 00s, mp3s started to digitalise music before streaming platforms became the most popular way to consume music.

In this decade, it is becoming increasingly less likely that we will see the introduction of a new superior format – regardless of how many artistic voices join the chorus on how the streaming format is obliterating their chances of financial stability and security. The lack of drive for innovation mostly boils down to the convenience and accessibility of music for music fans. For just £9.99 a month, Spotify users have access to most of the music recorded since the 60s.

Of course, the fact that the major labels and publishers are still getting a massive slice of the streaming royalty pie is yet another monolithic factor in the stagnation of progression.

Are Alternative Streaming Platforms the Solution?

Amazon Music, Apple Music, Deezer, Pandora, Tidal and YouTube are all often hailed as alternatives to Spotify, but the highest paying, Tidal, still only pays around $0.013 per stream. Furthermore, the platform only has 5 million registered users, compared to the 195 million premium subscribers and the 422 million monthly users on Spotify.

New streaming platforms will not resolve the issue that Spotify is presenting to artists in the music industry. In 2021, Spotify paid $7 billion in royalties; the real issue is that the bulk of that cash doesn’t end up in the pockets of artists, because, despite popular conception, Spotify doesn’t pay its artists directly. The money goes to the rights holders, publishers, and distributors before artists sniff the cash. So, in 2021, *only* 52,600 artists generated $10,000 or more via the platform. It is easy to blame Spotify for the current state of affairs. However, that is letting the major record labels and publishers still profiteering off the back of musicians off the hook.

Spotify is Reigning Supreme, But Other Revenue Streams Are Still Flowing

At this point, crying about Spotify not being able to pay the rent for all of the 11 million artists on Spotify is like shedding tears over the fact that you can’t get blood from a stone. Furthermore, it is misleading to suggest that streaming platforms are the only source of revenue for artists in 2022 or that streaming has completely replaced album sales.

It isn’t my intention to insinuate that every musician has the chance to rake in as much as the Rolling Stones by operating as an independent artist. What I’m alluding to is the fact that Spotify isn’t the only means of generating income in 2022. If recording an album and whacking it up on Spotify is the extent of your effort to create a viable income through your music, you’re not going to get far.

As the pandemic proved, most artists without a day job can only support themselves by heading out on tour, selling their merch and gaining new fans that will be happy to further invest in their careers. Even if you are the next big thing since the Beatles, fame and fortune aren’t just going to land on your doorstep; if you want it, you have to work for it. Only industry plants blow up overnight, don’t use the success of Taylor Swift and Billie Eilish as a measuring stick!

The music industry is incredibly oversaturated due to its accessibility in this era. Now, it is impossibly easy to create a lo-fi recording at home, stick it up on streaming platforms, call yourself an artist and expect the royalties to come streaming in. It is in no way realistic to expect that every artist contributing to the music industry will be balling from their artistry.

Everything may be a commodity in our era of late-stage capitalism but there has never been an industry which gives everyone the equal opportunity to bankroll themselves based on their passions.

This unrealistic and mercenary view is abstracting the beauty of 21st-century technology, which gives every artist the chance to express themselves and share their art with the world. That isn’t to say the population will be falling over themselves to hear it; what it does mean is that more artists have the chance to make a cultural impact with their art than ever before. And as we have seen that there is no easy way out of the digital era of music; it is vital to maximise income revenues away from platforms such as Spotify.

Create merch your fans will want to part with their hard-earned cash for. Push for physical sales on Bandcamp Fridays. Promote your music online. Be willing to tour with your music. And if that doesn’t yield any results, get inventive and check out this list of 42 ways to finance your career as an artist!